June 08, 2015
On a recent visit to our local library, I checked out a few DVDs for the boys to watch while I completed a few tasks around the house.  They fell in love with a certain DVD that contained a few popular children's stories. One story they were particularly fond of was The Three Little Pigs. 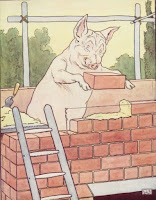 After playing the DVD numerous times, the boys began to memorize the story and from then on all they could talk about (and sing about) were the three pigs and the big bad wolf.   As they attempted to tell me about this classic fable, I began to think of the story from a spiritual aspect and how it can be applied in our daily battle with Satan, who is "the Big Bad Wolf" in our lives.

Much like the wolf in this story, Satan goes out "seeking whom he may devour" (1 Peter 5:8).
And you know what; sometimes we can exhibit some of the same the qualities as those pigs.

Maybe we are like the first pig who built his house with straw- a very weak material and foundation. This pig wanted to get by with the bare minimum. How many of us are like that? We are content with attending a couple Sunday services here or there (Easter and Christmas) and placing our unread family Bible on our table in an attempt to show we are "religious".  And the only time our children hear us pray is when we want our favorite team to win the Championship game or on certain holidays. We do just enough to get by.

Sisters, when we try to build our home and family life with as little Jesus as possible, we create a weak foundation. And when the enemy blows his winds of anger, jealousy, doubt, and despair, we topple over with ease just like the straw house this pig built. We don't fight, because we have nothing to fight with. Matthew 7:26, 27 (ESV) says:

26 And everyone who hears these words of mine and does not do them will be like a foolish man who built his house on the sand. 27 And the rain fell, and the floods came, and the winds blew and beat against that house, and it fell, and great was the fall of it.”

Consider the second pig, who built his home out of sticks. Although it was a little stronger than the straw his brother used, it still wasn't enough to keep the wolf from blowing his house down. This "pig" regularly attends the local church and carries his super highlighted Bible with tattered pages at all times. He has all of the church mannerisms and jargon down.  However, the heart of this pig reflects something totally different from what he is trying portray. Matthew 15:8-9 (HCSB) says:

These people honor Me with their lips,
but their heart is far from Me.
9 They worship Me in vain,
teaching as doctrines the commands of men.”

It is not enough to carry the Word of God in our hands and quote scriptures verbatim. It needs to be etched in our hearts.  Because when Satan comes and blows on our house of sticks, we will realize that we aren't as prepared as we thought we were. And CRASH!--our house crumbles.

Now the third pig was something else. Can't you see him? Confident. No fear. No worries. Ready and prepared for the wolf's imminent attack. This pig builds his house out of bricks-- strong, unwavering bricks.  He built his house out of material he could depend on, material that was proven to withstand hardships, material that would not fail him. When we make study and meditation on God's Word priority in our lives, we are building our home with bricks. As the word gets deeper in our hearts, we are adding more bricks-- creating a fortress that the devil cannot destroy. No matter what he throws at us--loss of a job, infidelity, a child with a drug addiction, failing health--it will not destroy us.  Isaiah 54:17 (NASB) says:

“No weapon that is formed against you will prosper;
And every tongue that accuses you in judgment you will condemn.
This is the heritage of the servants of the Lord,
And their vindication is from Me,” declares the Lord.

We can say that scripture with conviction, knowing that we already have victory over the enemy.

Our homes are only as strong as what we build them with. My desire is that, as mothers, we build our homes with the truths of God and not by the world's standards. I am challenging each of us to ask ourselves this question: "When the Big Bad Wolf blows on my house, will it stand?"

April 28, 2016
With April being Autism Awareness Month, I thought it would be the appropriate time to share our story thus far as it relates to having a child on the autism spectrum. I had planned to tell this story earlier, but it just never seemed like the right time. I wanted to be as transparent as possible in sharing our story, so this may take more than one blog post. Also, in a later post, my husband will be sharing his personal reflections on how this journey with autism has affected him as a father and husband. Please know that our story will not be the same as other families because all children with autism are not the same. It is my hope that we can encourage others who may be on this same journey, as well as enlighten others about autism spectrum disorder. So here's our story: To look at our firstborn, Jason, Jr., you would think he is an exact replica of his father, Big Jason. When he was born, there was no doubt of which parent he looked like. Jason, Jr., was our answered
5 comments
Read more