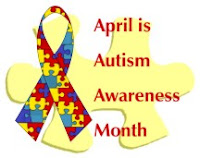 With April being Autism Awareness Month, I thought it would be the appropriate time to share our story thus far as it relates to having a child on the autism spectrum. I had planned to tell this story earlier, but it just never seemed like the right time. I wanted to be as transparent as possible in sharing our story, so this may take more than one blog post. Also, in a later post, my husband will be sharing his personal reflections on how this journey with autism has affected him as a father and husband. Please know that our story will not be the same as other families because all children with autism are not the same. It is my hope that we can encourage others who may be on this same journey, as well as enlighten others about autism spectrum disorder.

So here's our story:
To look at our firstborn, Jason, Jr., you would think he is an exact replica of his father, Big Jason. When he was born, there was no doubt of which parent he looked like. Jason, Jr., was our answered prayer after a battle with infertility. So he was perfect, right?

As those first few months passed and Jason grew, we began to notice little things he would do--somewhat odd, but not really alarming things. For instance, whenever he would hear a certain sound on one of his toys, he would immediately get sad and begin to cry. We could not understand, why that particular sound affected him so much. Another time, we took Jason to the zoo (he was about a year old) and we went inside a little building to watch the elephants and all he could do was stare at the ceiling fan. There was a 10,000 lb elephant in his line of sight and all he cared about was the ceiling fan spinning. We laughed it off and thought nothing of it.

Jason continued to grow and meet his milestones. He even started saying a few words, but most of what he said was a bunch of unintelligible babble. I remember telling my husband, "I think he may need speech therapy one day". I don't think Big Jason really believed me at the time. So around 18 months or so I asked one of the pediatricians in this particular group of doctors should I be worried about his speech. Her answer was no, that his speech was pretty normal and I had nothing to worry about.

Flash forward to May 2012…Jason's 2 year old check-up and Trent's 2 month old checkup. My best friend had come into town for a visit and accompanied me to the boys' appointment. After the doctor (who was very rude and had a terrible bedside manner by the way) checked out Trenton, he proceeded to examine Jason. By the end of the examination, out of the blue, the doctor (with his lack of manners) asks me to fill out the Autism questionnaire (which I had already completed 6 months earlier). At that moment the world stopped… the "A" word? I had already taken this questionnaire before and Jason met the necessary milestones so why did I need to do this again? Where did this come from? Blindsided. Confused. Speechless.

I remember going home in a bit of a daze. I kept asking my best friend "Why would he say that?" "Does he think Jason has autism?"  I tried to let it go and move on. And for a little while I did, until one day Jason became sick and I had to take him to see another doctor.

During this doctor's examination, he listened to Jason talk and quickly determined he was using echolalia to speak. Echolalia refers to the imitation of words spoken by others and it is common in children who have autism. He began to talk to me about things he saw in Jason that alluded to him possibly having autism.  He then gave me some information on a resource to call to have Jason evaluated.

Here we were, a second doctor suggesting that our child may be on the spectrum. I was heartbroken! I didn't understand. He seemed fine to me. But I thought that maybe I should call the resource the doctor suggested. This particular resource was an early intervention program that evaluated children under the age of three. After meeting with them, they also suggested that he could possibly have autism. Again, heartbroken!

I didn't know what else to do except to make sure he was at every appointment with the speech therapists. We tried to set attainable goals for Jason. One goal in particular was to have him call me mom or mommy--something that comes naturally to most children. He had not been able to do so up until that point and that devastated me. Then one day, he started calling me mommy, and I was ecstatic! For the first time in months, I had a glimmer of hope.

As all of this was going on, my emotions were through the roof! I cried all the time. Sometimes around others, sometimes alone. I guess you could say I was in mourning. I was mourning the death of a dream that I had for my child.  I felt like I was a terrible mother, that maybe I had inadvertently did something that harmed my child. I had so many questions but so few answers: Why was this happening to my family? God gave us this child after we struggled with infertility, so why would he allow our son to be "different"? What will his future be like?

I went on for months like this--just torn up in the inside. I found myself trying to "hide" my child, thinking I was protecting him from those that may not understand him. I even slowly withdrew from my own friends since Jason was different from their children and I didn’t want them to see him as strange. But that was not what Jason needed at all. He needed to be around others to help develop his social skills.

As time moved on, God would bless us by giving us victories here and there.  These victories reminded us that although we were in an ongoing battle, He was still working on our behalf. We were encouraged and determined not to give up the fight.

June 08, 2015
On a recent visit to our local library, I checked out a few DVDs for the boys to watch while I completed a few tasks around the house.  They fell in love with a certain DVD that contained a few popular children's stories. One story they were particularly fond of was The Three Little Pigs. After playing the DVD numerous times, the boys began to memorize the story and from then on all they could talk about (and sing about) were the three pigs and the big bad wolf.    As they attempted to tell me about this classic fable, I began to think of the story from a spiritual aspect and how it can be applied in our daily battle with Satan, who is "the Big Bad Wolf" in our lives. Much like the wolf in this story, Satan goes out "seeking whom he may devour" (1 Peter 5:8). And you know what; sometimes we can exhibit some of the same the qualities as those pigs. Maybe we are like the first pig who built his house with straw- a very weak material and foundatio
5 comments
Read more