How I Became a Mother, Part 2!

July 13, 2015
When I last wrote, my husband and I had just found out that I was pregnant moments before we were to see the doctor about my upcoming surgery.

We walked into that fertility doctor's office with the biggest smiles on our faces. It had been a while since we had experienced this type of joy. They called us back into the doctor's office and immediately we told him what had just happened. But his response was not at all what we expected. With as much coldness as  you could imagine, he said in so many words, "it doesn't matter. This pregnancy isn't viable. You still need to have this surgery." I couldn't believe my ears. He still wanted to do the surgery! At that point I knew we needed to get as far away from this doctor as we possibly could. Even if this pregnancy did not make it, his approach to us was very frigid and insensitive.

Our hearts sank!  We told him we were still going to wait and see what happens. We left that office with a determination to never see this guy ever again.

As the next few days went on, my regular doctor had me come in for blood tests every other day. My hormone levels had been low and they were not increasing at the rate they should have. It was hard hearing the news that this pregnancy would most likely end in a miscarriage.  And then on a Friday, it happened. I miscarried. Another disappointment. Another failure, so I thought.

The doctors called it a chemical pregnancy. A chemical pregnancy is a miscarriage that occurs around week 4 or 5, before an ultrasound can show a gestational sac. It's actually pretty common and many women don't even know they have had a miscarriage because it happened so early.
I cried everyday and my husband tried to console me as best he could, but at that point there was nothing he could say.   I was at my weakest.  We had told several people about our pregnancy and now we had to "un-tell" them. That was hard. Feelings of shame and defeat flooded my soul.

A few months passed and the healing process was still ongoing. I wasn't sure if I would ever be ready to try again. But I continued to meditate on scripture and pray a lot during this time.  One of my favorite verses that I remember reading was James 1:2,3 (NASB):

2 Consider it all joy, my brethren, when you encounter various trials, 3 knowing that the testing of your faith produces endurance.

Considering "it all joy"  was easier said than done, but I held on to that verse anyway. It was just the word I needed. This was indeed going to be a journey of faith that would require me to patiently wait on God.

Around March of the following year, God spoke to my husband through a dream. In this dream he saw a card flash before him. There were two names on it: Jeremiah and Seth. There were other words on the card but they were blurred out so that he couldn't see what they said.  We talked the next day about it and we knew what "Jeremiah" meant (it related to another situation my husband was dealing with), but we had no clue what "Seth" meant. So I did a little research. We learned that Seth was the third son of Adam and Eve who God gave them to replace Abel. (Gen. 4:25) His name comes from a Hebrew word meaning "substitute".  It was then that we realized what God was saying to us: He would give us a son in compensation for the baby we lost.  Our hearts were encouraged and we decided it was time to try again.

May of the following year, my doctor sent me to another fertility specialist.  I specifically requested this doctor after talking with co-workers who he had successfully helped become parents. The initial meeting with him was a far cry from the previous specialist.   I remember one of the things he told us in our consult. He said that we were going to look all the possible factors of what was causing my infertility,  but nothing  would happen until God was ready to touch my belly.  After that conversation, we knew immediately that he was the right doctor for us.

Over the next couple months, we would proceed to get my body prepared for having a baby. I lost almost 20 lbs that summer and in June I finally had the surgery that I needed to have.  When he did the procedure, he found that my Fallopian tube, ovary, and colon had fused together from scar tissue that resulted from an appendectomy I had as a child. He also found endometriosis. That surgery ended with the doctor having to remove one Fallopian tube and an ovary.

A couple months went by and still no baby. At this point, the doctor said we would try fertility drugs the next time around.  Well, we really didn't want to have go that route. All I could think of was that I did not want to be the next Octomom! So we prayed about it.

The time had come for us to begin fertility drugs.  Knowing this, I thought I should just take a home pregnancy test to be on the safe side. I woke up one morning and went into the bathroom to take the test. A few minutes later I was running out of the bathroom screaming "We're pregnant!!" My husband sat up in bed immediately. His smile was wider than I had ever seen before. God had answered our prayer. Little Jason was on his way!!!

When I look back over our story, I am reminded of how God's timing is always perfect. I see his hand in everything that took place-- from how he kept us from being in the hands of that doctor to blessing us to become pregnant just days before we would start fertility drugs.  I am also reminded of the grace and mercy he showed us. Many times we were about to step out ahead of what He had for us, but he blocked it. And boy, did he block it!  When I thought God wasn’t listening, I now know that he was. He was there carrying me the whole time. I am emotional just thinking about it. Nobody but God could have done this for my husband and me.

Writing this blog post has been uplifting for me and I hope that it encourages you as well. Your issue may not be infertility, but whatever it is, I am a witness to what God can do in impossible situations. Hold fast to the promises that he is spoken in his Word.

8 It is the LORD who goes before you. He will be with you; he will not leave you or forsake you. Do not fear or be dismayed." - Deuteronomy 31:8 (ESV) 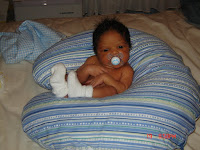 May 31, 2015
Hey everyone! Thanks for stopping by to check out my new blog—Mama's Maze. I am truly excited about starting this blog. God placed this on my heart a while ago so it is awesome to see it come to fruition.  I have never done anything like this before, so I am thrilled about venturing into uncharted territory. Writing is a passion of mine, and I love talking about the goodness of God.  So what better way to put the two together than in a blog. How did I come up with the name Mama's Maze?  Well, one day as I was pondering on what the name of this blog would be, I thought about my experiences as a mother.  I mean, after being in the game for five years now, what could I compare motherhood to?  After much thought, the word "maze" came to mind. If you have ever been in a maze or played some type of game that had one, you know it can be challenging, frustrating, and rewarding if you ever make it through.  There are so many twists and turns that it can be quite overwhelm
10 comments
Read more

June 08, 2015
On a recent visit to our local library, I checked out a few DVDs for the boys to watch while I completed a few tasks around the house.  They fell in love with a certain DVD that contained a few popular children's stories. One story they were particularly fond of was The Three Little Pigs. After playing the DVD numerous times, the boys began to memorize the story and from then on all they could talk about (and sing about) were the three pigs and the big bad wolf.    As they attempted to tell me about this classic fable, I began to think of the story from a spiritual aspect and how it can be applied in our daily battle with Satan, who is "the Big Bad Wolf" in our lives. Much like the wolf in this story, Satan goes out "seeking whom he may devour" (1 Peter 5:8). And you know what; sometimes we can exhibit some of the same the qualities as those pigs. Maybe we are like the first pig who built his house with straw- a very weak material and foundatio
4 comments
Read more

April 28, 2016
With April being Autism Awareness Month, I thought it would be the appropriate time to share our story thus far as it relates to having a child on the autism spectrum. I had planned to tell this story earlier, but it just never seemed like the right time. I wanted to be as transparent as possible in sharing our story, so this may take more than one blog post. Also, in a later post, my husband will be sharing his personal reflections on how this journey with autism has affected him as a father and husband. Please know that our story will not be the same as other families because all children with autism are not the same. It is my hope that we can encourage others who may be on this same journey, as well as enlighten others about autism spectrum disorder. So here's our story: To look at our firstborn, Jason, Jr., you would think he is an exact replica of his father, Big Jason. When he was born, there was no doubt of which parent he looked like. Jason, Jr., was our answered
4 comments
Read more