It has been a while since my last post (a year almost), but here is the second part to our autism journey. With it being Autism Awareness Month, I wanted to continue to share our story. 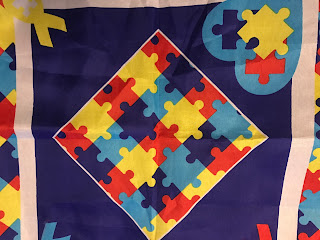 By the time Jason was 2 1/2, he was in speech therapy, a language clinic, and a Mother's Day Out Program.  We wanted to give Jason everything we possibly could to help him develop. Looking back, I can definitely see how God was working the whole time. The various people who worked with Jason, were definitely put in our path for a reason. From the time Jason started early intervention (September 2012) until the time it ended (May 2013), I saw great improvement, especially in the area of speech. By the end, not only was he talking well, but he was talking TOO much! Ha ha!

However, even with all of this improvement, he was still a bit behind his peers in some areas and I was in denial about him possibly having autism.  I just did not want to accept that my son could be on the spectrum. Although, I knew that if he did have autism it would be on the mild end of the spectrum, I simply wanted to believe it was just a developmental delay. But, the problem with denial is that you can miss out on getting some of the help you need early on.

So when the last days of early intervention approached, it was suggested that we go through the school system and have Jason evaluated. Then he could be put in a pre-k program in the public school for the next school year.  At that time I was very adamant about my children going to private school, so I went against their recommendation and sent him to a private pre-k program at a nearby Christian school. Well, that did not work out quite how we wanted it to and he ended up leaving the program in the middle of the school year.

I was devastated because now, Jason was three years old and was not in any program at all. I was just so afraid of having the "A" word attached to my son's name. So a few months later, we made the decision to have Jason evaluated by the school system.

The next few days consisted of evaluations, questionnaires and conversations about my son and his development. Finally it was time for the meeting to create and discuss a plan for Jason's education. A wonderful sister from our church attended the meeting with us. She gave us so much support and professional advice. Her presence was such a blessing.

After discussing the results of the evaluations and it was agreed that the best diagnosis for Jason, Jr. was autism. There it was…the "A" word ….in print. I immediately began crying.  This was not what I wanted for my firstborn. I did not want him to be "different". But deep inside, I knew that this was the right diagnosis. I don't think the evaluators expected the reaction that I had. It seemed to catch them off guard. They tried to give me assurance that everything would be okay. The meeting was soon over and I found myself driving home alone in a bit of a funk.

Then an amazing thing happened inside of me over the hours and days following the diagnosis. After I had a few good cries, my emotions changed from disappointment, to fueling a determination inside of me that I did not know I had. From that point on, I resolved within myself that with God's help I would fight for my son and push through. For the first time, I felt relieved. Now that we had officially established what was going on, we had a direction to go. And that was the LAST time I cried about his diagnosis.

Fast forward to the present….Jason is now in first grade.  And he is doing so well and consistently showing me that nothing will hold him back. He still has struggles here and there. He is high functioning, so sometimes you may not realize he has autism. It's noticeable when he starts talking about some of the things he is obsessed with (elevators, microwaves, and hotels among others) or when he struggles to stay on topic in a conversation. Outside of that, he is a typical growing kid and we try and treat him as such.

I have seen God's hand upon Jason Jr.'s life and I know that He has plans for our son that we cannot even imagine.  God has really been good to us throughout this journey. Without Him we could not keep pushing through. He was, is, and will always be faithful to us.

April 28, 2016
With April being Autism Awareness Month, I thought it would be the appropriate time to share our story thus far as it relates to having a child on the autism spectrum. I had planned to tell this story earlier, but it just never seemed like the right time. I wanted to be as transparent as possible in sharing our story, so this may take more than one blog post. Also, in a later post, my husband will be sharing his personal reflections on how this journey with autism has affected him as a father and husband. Please know that our story will not be the same as other families because all children with autism are not the same. It is my hope that we can encourage others who may be on this same journey, as well as enlighten others about autism spectrum disorder. So here's our story: To look at our firstborn, Jason, Jr., you would think he is an exact replica of his father, Big Jason. When he was born, there was no doubt of which parent he looked like. Jason, Jr., was our answered
5 comments
Read more

June 08, 2015
On a recent visit to our local library, I checked out a few DVDs for the boys to watch while I completed a few tasks around the house.  They fell in love with a certain DVD that contained a few popular children's stories. One story they were particularly fond of was The Three Little Pigs. After playing the DVD numerous times, the boys began to memorize the story and from then on all they could talk about (and sing about) were the three pigs and the big bad wolf.    As they attempted to tell me about this classic fable, I began to think of the story from a spiritual aspect and how it can be applied in our daily battle with Satan, who is "the Big Bad Wolf" in our lives. Much like the wolf in this story, Satan goes out "seeking whom he may devour" (1 Peter 5:8). And you know what; sometimes we can exhibit some of the same the qualities as those pigs. Maybe we are like the first pig who built his house with straw- a very weak material and foundatio
5 comments
Read more